Where were you born?  I was born in the land of the long white cloud — a.k.a. New Zealand!  When I was a teenager we moved (me, kicking and screaming) across the Tasman to the sunburnt country, Australia.  As much as my teen hormones fought the change, it really foreshadowed what was to come and showed me early on, that you can step out of your comfort zone and make things work in a new place, whether it be another city, state or country.

Where else have you lived?  As a budding journalist in Australia, I moved around a lot within the country in my twenties, in a bid to achieve my dream goal of becoming a news reader.  After some hard ‘yakka’ and a lot of time in regional television, eventually my feet landed firmly in Sydney, where I worked for Sky News Australia for a decade.  Then, we decided it was time to take advantage of opportunities being presented and do that thing they call ‘Carpe Diem!’  The Fragrant Harbour came knocking and we took some mighty deep breaths and said “Yes! Let’s do this!”

How long were you in Hong Kong?  We landed here in 2010.  For the first time in a long time, I was homeless, jobless, friendless, car-less and pet-less, but what I did have was a ‘baby bump!’  It was a complete ‘about turn’ for me and I always joke that being in the so-called “City that Never Sleeps” was highly appropriate because when our small person arrived, she never slept either!

Which part of Hong Kong did you live in?  We lived in Kowloon and it was one of the best decisions we ever made.  My husband worked at the W Hotel, so with long hours in store we needed to be somewhere reasonably close by.  And with a baby in tow, it couldn’t be more perfect.  I spent many sleep deprived hours roaming the sleek and shiny Elements and I found the true meaning of a mint mocha in Starbucks!  Even though we lived in fairly small living quarters, the convenience couldn’t be beat and we stayed there for four years until we were pried away from Hong Kong!

Children and ages?  Ava is now five and a half. Even though we are now living in deep, dark China she still calls herself a ‘Honky!’  Born and bred in Hong Kong — it will always be her home. 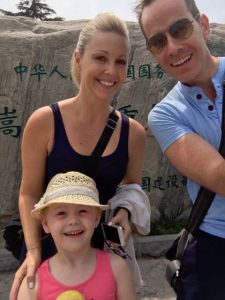 Are you working and what do you do?  About nine weeks after Ava was born I was asked to MC an event. To be honest, it was pretty nerve wracking and I felt like I’d lost my confidence, but I took a deep breath, ditched the tracksuit pants, fixed myself up and hauled myself off to the event, breast pads and all!  From there on, I started to do bits and pieces here and there from media training to writing for magazines and websites, presenting and more MC-ing. I realized just because I’d had a baby, with 20 years in the media industry, my skills were not useless after all!

Slowly as Ava grew and bit by bit I found more ‘me’ time, I began building up my freelance business.  Two years into our Hong Kong stint, I started my expat-entertainment blog Mint Mocha Musings: The Hotelier’s Wife, an Expat Affair in Hong Kong, which has also become a source of income.  From there, my passion for writing grew wildly and MMM became a registered business in Hong Kong and a great platform for my media work.  Hong Kong — as we all know — is a fantastic place to start a small business.  Now, thankfully with a laptop often my only requirement, I can work from anywhere — so, moving to Xi’an hasn’t hindered my ability to do what I did in HK.  Plus, I still fly to Hong Kong to MC, media train (shop and see my expat family) as much as I can.  Sometimes it’s like I’ve never left.

What time of day do you check Hong Kong Moms?  Pretty much all day, every day!  I still feel very much a part of the community.  My long time doctor, dermatologist, beautician and hairdresser are all in Hong Kong, so regular maintenance visits are in order, not to mention opportunities to stock up on supplies from chemists to supermarkets, even the local book shop!

What posts do you comment on and why?  Usually I comment on posts from people wanting to know a good ‘this’ or a good ‘that’.  And occasionally, I admit, I may have made a sneaky, cheeky comment on a post that lambasted helpers or where moms were judged for just trying to do their thing.  I try not to get involved in any ‘argy bargy’ though.

What is the best thing you have learned from Hong Kong Moms?  Hong Kong Moms is a massive community of people from all walks of life with an abundance of knowledge between them.  If you don’t know something, you can bet someone on Hong Kong Moms will!  I can’t pinpoint one single thing I’ve learned as there’s simply been too many.

What is your favorite Hong Kong Moms post?  I always love those posts where someone has lost something and low and behold, a Hong Kong Mom finds it.  Or the other way around, someone posts something they’ve found and the owner is eventually located through the team that is Hong Kong Moms.  I also like the fact that someone can be having a rough time and Hong Kong Moms will immediately rally around them with support.  You can never feel alone when you’ve got this community backing you.
That’s the power of Hong Kong Moms!

What do you ask Hong Kong Moms?  Anything and everything.  If it can’t be found with a simple Google first, then my go to search guide is Hong Kong Moms.

What is your biggest Hong Kong fave?  The convenience of Hong Kong never fails to amaze me.  Being relatively small geographically, it’s easy to get around (once you know where you’re going, I might add).  The MTR is one of the best in the world.  Everything is at your fingertips!  Most of all I love that Hong Kong is a fascinating blend of East meets West — I love the civilized city-side mixed with the ancient culture.  I also love that there is a heaving metropolis flanked by tranquil beaches.  It’s definitely the best of both worlds.

And frustration?  Compared with life in Xi’an, any frustrations I had living in Hong Kong now seem relatively small!  I would’ve said the pollution, but relative to Xi’an, you ain’t seen nothin’ yet!

What is your craziest Hong Kong experience?  I don’t think I can beat fellow Hong Kong Mom Kate Farr’s wild dog story!  (Although we were cornered by a trio of wild dogs in Macau!)  But what isn’t crazy when you first encounter expat life in a foreign country?  Probably the funniest (or perhaps most shocking) things happened when I was pregnant and/or first had Ava:  Little, old, random ladies asking me if I was “feeding with my breasts,” or; telling me how to hold my new baby and insisting she needed socks on — in 30-degree heat!  And I’ll never forget one doctor remarking, as I left his office, “Big mama, big baby!”  You do eventually get used to the ‘directness’ of locals and realize they mean no harm.  To me, expat life is always crazy but that’s half the fun isn’t it! 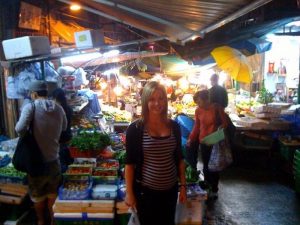 Does anyone ever recognize you or your name from Hong Kong Moms?  I think some Hong Kong Moms have come to know me as that crazy, mint-mocha-loving blogger who pops up every now and then.  I’ve always had loads of support from the group, which is humbling and comforting.

What kind of friendships have you made through Hong Kong Moms?  I like how there really only seems to be six degrees of separation in the Hong Kong expat community. I’ll often see people on Hong Kong Moms that I know from one circle who I then realize are friends with people I know in another circle.  Everyone is somehow connected.  There are lots of people I’ve met and chatted to on Hong Kong Moms that I’ve yet to meet in person but we have a great rapport.

Which Hong Kong Mom would you like you to see featured next?  There are so many great moms to feature! Natalie O’Brien, mom of two and director of English Editor Asia; Sharon Maloney, mom, educator, writer and founder of fabulous food blog Jasmine & Ginger; Camilla O’Connor, mother of three (including twins) and dedicated psychologist; Tammy McCann, mom of three and regular contributor to the community; Alia Marwah Eyres, mom to three gorgeous boys and Chief Executive Officer of Mother’s Choice.