Many of you will recognize the characteristic Hong Kong skyline as painted by Italian born Francesco Lietti. His love of this vibrant, eclectic city immediately transpires through his art. He has called Hong Kong his home for more than ten years but the road that took him here was winding to say the least. Having lived in London for just under seven years, working as an architect, he got an itch and embarked on a journey East together with a good friend. Travelling the land route to Beijing, he continued through China, amazed with the impressions along the way. As he set foot in Hong Kong, he was intrigued by the beauty of the man made city, coupled with the stunning nature surrounding it, and decided to stay for a while. He landed a job at one of the big prestigious architect firms in the city and continued painting in his scarce spare time.

So an avid traveller, Francesco has extensively painted his impressions from all corners of the world, but he keeps coming back to reinterpreting the Hong Kong skyline on his canvas. The colourful, naïve take on Hong Kong is his trademark in the city. Reminicsing about seeing that skyline for the first time, Francesco says: “It was like if natural perfection had met the perfect human touch. I was mesmerized. I was hooked. I had instantly fallen in love myself. I had to capture it.”

His process is based on complete immersion. He goes to a place, absorbs the atmosphere, eats the foods, talks to the people and then paints what he sees, feels and senses. The aim is to make the viewer re-experience what he has experienced. Using mixed media he creates his humorous visions of the city in striking colours, capturing the essence of Hong Kong’s famous skyline.

You might have come across Francesco’s work at one of the art fairs that are now very much a must in the yearly calendar of Hong Kong. He is represented by reputable Macey & Sons and their adjacent gallery Lot88 and most recently appeared at the Contemporary Art Show in September. His works are part of private collections all over the world.

Francesco is also keen on getting involved with various local communities, such as collaborative painting with children. Earlier this year, he was commissioned by Hong Kong International School (HKIS) to co-create several works together with the art teachers and primary students. It was an immensely popular project among the students and the finished artworks now adorn the walls of the newly built HKIS campus in Repulse Bay. 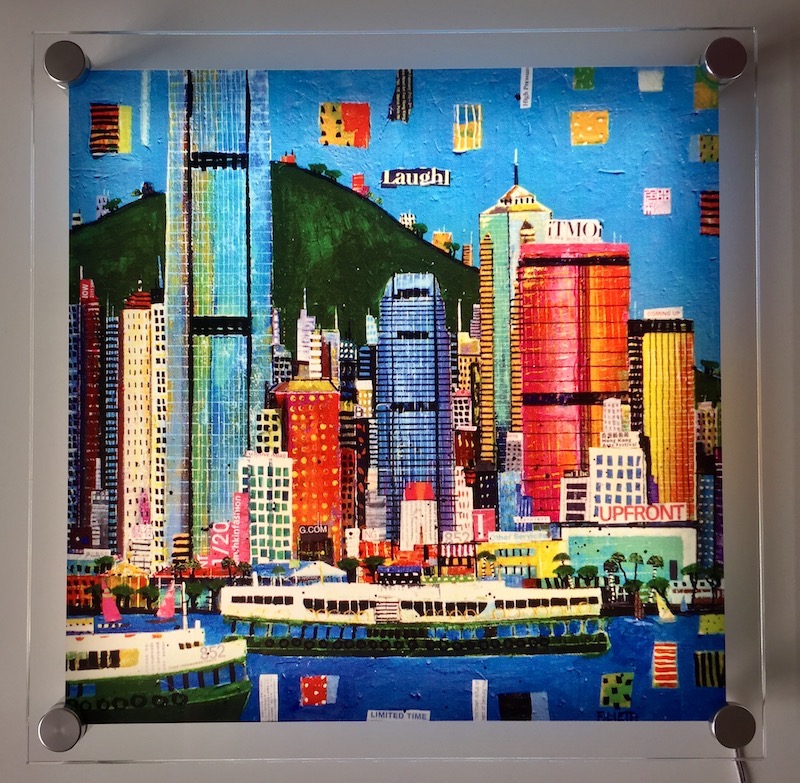 Francesco’s work — featuring the limited edition art on Plexiglass/Perspex print (above), that is lit up from behind by a LED plate (sold separately) — will be available this week at the Art & Design Market popup. Prices start from $2,500 and all prints come with a certificate signed by the artist.