It’s the fast-talking, Singlish-slinging Jazzy, star of Sarong Party Girls, who keeps us engaged in this colorful, culturally-rich novel.  While the storyline — think clubbing, drinking, dancing, and most importantly, husband-hunting — sometimes shocks (can a girl really ingest that much Chivas?), it is a captivating and funny tale about coming of age, finding independence, friendship and family.  But, we need to know — is this what life is truly like for the single girls of Singapore?  Author Cheryl Lu-Lien Tan reveals all to Hong Kong Moms.

How much of this really reflects life for a subset of young girls in Singapore?

It’s fiction — though it is true that Singapore, for all its glitzy modernity, still does remain rather traditional at the heart of it, and this can sometimes mean that family structures or social situations can be guided a little by patriarchal standards.  In terms of activities reflected in the book, it’s also true that clubbing and going to bars is a fairly popular activity among young women and men in Singapore.  Anyone who’s visited the country on a weekend knows how packed places like Clarke Quay and Club Street get on Saturday nights.

Did you grow up speaking “Singlish”?  And was it challenging to write a book in this style?  How do you switch back to speaking more traditional English when in the US?

I did, with my friends and in social situations with other Singaporeans — though to a large extent, not the way that Jazzy speaks it.  She does tend to be more vulgar than my friends and I are!  It wasn’t challenging at all — in fact, I found it to be rather exhilarating.  I sometimes felt as if I were simply doing my best to type down the torrent of dialogue I was hearing in my head.  I greatly enjoyed writing this book.  Having said that, while it was enjoyable and easy actually writing the book — this was only once I’d gotten my head fully in it.  I wrote almost all of this book outside of Asia (save for one chapter that I wrote on a 12-plus hour flight from Tokyo to the US) and this meant that I had to switch from my head being immersed in everyday “American” English to hardcore Singlish.  This adjustment often took a while — so I often had to be alone and not hearing anyone talking for an hour or a few hours before I could fully get my head into Singlish and actually write well.  This is why I did the bulk of the writing of this book while on artist residencies at colonies in the United States, Scotland and France — those places give writers hours and days of peace and undisturbed quiet in order to write.  Whenever I had a few weeks at one of those residencies the words just flew.

What kind of research did you do for this book?

When I was in Singapore in 2009 to research “A Tiger in the Kitchen: A Memoir of Food and Family,” I spent days cooking with my aunties in the kitchen and at night, reconnecting with some childhood schoolmates of mine in Singapore.  Some of them had been recently divorced and were back on the bar scene and I ended up hanging out with them in those settings.  The canvas of some chapters came from those nights — the bar settings, the vignettes witnessed etc.  It was also eye-opening to be spending that much time in the Singaporean social scene again — I was married at the time and to be looking at the dating scene, and contemporary male-female dynamics and how class, race and nationality fit into that, from the outside in was fascinating.  When a friend of mine who had recently started dating a British guy joked about the goal being to have a “Chanel baby” I immediately thought, “That’s got to be in a book sometime.”

Did you get any feedback that this book portrayed women in a negative light?

A newspaper in Singapore did ask me why I chose to write about a character who set such a bad example — I have always found the most flawed characters to be the most interesting in literature, whether it’s Humbert Humbert in Lolita to Balram Halwai in “The White Tiger.”  I find the women in this book rather sympathetic characters — flawed, yes, but they are fundamentally good people.  In fact, readers have pointed out more often to me that it’s the men who end up coming off the worst in this book — don’t you think that’s true?

Do you see this prioritizing of finding a husband waning at all in modern Singapore? Do you think more and more girls are like Jazzy and choosing their own path?

Again, this is fiction — I have always found sarong party girls and the concept of them fascinating and that’s why I chose to write about them.  I don’t, in any way, think that Jazzy and her cohort are representative of all Singaporean women — though I do see Singaporean women becoming more independent and more open to seeking out and finding love on their own terms, or at least trying to. I don’t think that this notion of “finding a husband” is anything uniquely Singaporean in any way — I see the same thing happening in New York City just about every day and if you want to look at women in literature, it wasn’t any different in the times of Jane Austen as well.

Did you find it difficult to relate to American women when you left Singapore and settled in the US? Did the Americans have an understanding of life in Singapore at all?

I left Singapore in 1993 to live in Evanston, Ill., when I started college there — I can’t tell you how often it was asked (or just assumed) that Singapore was part of China.  Then when the caning of Michael Fay happened in Singapore, that was all anyone asked me about for years when they found out I was from Singapore — caning, chewing gum and our strict laws.  That said, I made wonderful American friends from the get go when I moved to the US and I feel very fortunate — some of them remain dear friends today.

What do you personally miss most about Asia when you are in the US?

The food — and my family.  I missed the food so much I ended up writing a whole book about it!  “A Tiger in the Kitchen” really was an ode to my heartsick food in way — missing my grandmother’s pineapple tarts and salted vegetable and duck soup led me on the journey back to Singapore to reclaim my history and discover my identity as a modern Asian woman by entering the kitchens of my grandmother and aunties in order to — finally — learn how to cook.

Where can we go in Singapore now to get a taste for the life portrayed in this book?

Clarke Quay is where a lot of the club scenes are set — but some of the other places are mentioned by their actual name as well, the Shangri-La Hotel, Relish by Wild Rocket, where Jazzy goes for brunch.  (I actually met with a Singaporean book club there recently — it was lovely to discuss “Sarong Party Girls” in a place where a scene had been set!)  Apart from that, I highly recommend visiting an old kopitiam (neighborhood coffee shop) for a morning kopi and having a meal at one of Singapore’s many hawker centers (I love Chomp Chomp in Serangoon Gardens or the East Coast Lagoon Village or Changi Village ones, both of which are by the beach).  I also recommend taking a walk around Tiong Bahru, the neighborhood where Jazzy lives — it’s one of my favorite places in Singapore because of its 1940s Art Deco buildings (it was Singapore’s first planned “suburb”) where old families and seniors still live.  But gradually, the neighborhood has become this rather hip place with fancy restaurants and boutiques — I feel it physically and visually encapsulates the clash that Jazzy feels in her life, of being torn between the old and the new, who you are and who you want to be.

What are your favorite places to go in Singapore? Restaurants? Shops? Neighborhoods?

Tiong Bahru, for the reasons listed above, and I really love Changi Village because it’s a place in Singapore that still feels a little sleepy, like old Singapore, and relatively (compared to the rest of the island, for sure) untouched by time.

This book begs for a sequel! Will we get to learn more about what happens to Jazzy?

It’s funny — I never intended for there to be a sequel to this book.  When I started writing it, I had the first chapter and I could see the very last scene very clearly in my head and to me, that was it for the story — that last scene would be our last scene with Jazzy.  Since the book has come out though, I’ve had many people ask me about a sequel.  I’ve already begun writing my next book — another novel, also set in Singapore — and it’s very different from “Sarong Party Girls” and not a sequel in any way.  Based on the questions I’ve been getting about SPG though, I guess I’m not ruling out writing a sequel down the road. We will see … 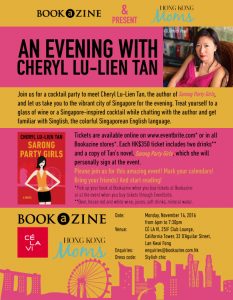 Buy your tickets now for a fabulous night out with the Sarong Party Girls author, Bookazine and Hong Kong Moms!  See you there!