Where were you born?  In a town called Banbury, Oxfordshire in England.  You may know the nursery rhyme “Ride a Cock Horse to Banbury Cross”?!  That’s our rather tenuous claim to fame.

I’m nomadic by nature, having lived in more than 20 different homes.  But I returned to the hospital where I was born to have my son 30 years later — a little like a salmon returning to spawn!

Where else have you lived?  London, Manchester, Portugal, New York and New Jersey

How long have you been in Hong Kong?  My mother is Hong Kong Chinese and I lived here when I was younger while my Dad worked for Coca-Cola (attending Bradbury and then a brief stint at South Island school before being sent to an English boarding school in Malvern, Worcestershire).  In those days Hong Kong was still considered a “hardship placement” for Westerners, so we lived the good life!  My Chinese family still lives here, but sadly my parents and my brothers are now back living in the UK.  And HK is no longer considered a hardship placement!  I did three years in Manchester, two years in the States, and 7 years in London before permanently moving back to the 852 with my husband in 2011.  The moment I stepped off the plane I knew I was back home.

Which part of Hong Kong do you live in?  We live on Lyttelton Road just above Sai Ying Pun.  Most people are at great pains to call it the “Mid Levels”, but we are proud to live in “The Pun”!  We’ve seen so much change in the locality in the last two years — it is absolutely remarkable.  Luckily we have a crazy landlord in her 90s who lives in Canada and has no idea that her property is now in the midst of a trendy hub!  Ha!  We even have a big private back yard which is practically unheard of around here.  We feel incredibly fortunate to have discovered such a gem.

Children and ages?  Our son, Miller, is four-and-a-half and our daughter, Leila, is about to turn two. 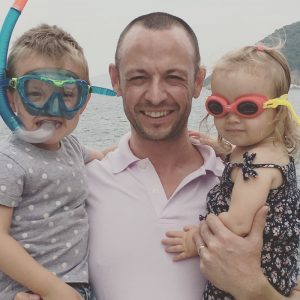 Are you working in Hong Kong and what do you do?  It is my great pleasure to run The Lion Rock Press, which sells Hong Kong inspired stationery and gifts.  I started off just selling three birthday cards, and four charity Christmas card designs in support of Mother’s Choice.  Now we have 80 greeting card designs for all occasions, 20 different wrapping papers, and a huge range of gifts including puzzles and Christmas decorations. I would say 80% of my customers are Hong Kong Moms!

What work did you do in your past lives?  I’ve worked at every opportunity since my early teens.  I started with waitressing at weddings, washing up in kitchens, making sandwiches in delis.  I’ve sold pineapples in train stations, worked cattle on a ranch in the Outback, sweated on a plastic factory production line, silver served in Scotland Yard, been a dancer in clubs, leafletted for supermarkets, written trend reports for the fashion industry.  I really just love to work, and I’ve learned things at every single job I’ve done.

Before moving to Hong Kong, my previous business was a bespoke menswear business in London using a Hong Kong tailor to be an alternative service to Savile Row for the younger generation of city boys.  It was totally wild, and unforgettable, but definitely not appropriate for a mother!  I will always miss the hilarious banter and being so mobile — I walked between the offices pulling my swatch books in a wheelie case — but I wouldn’t trade my life now for anything.

What brought you to Hong Kong and why have you stayed?  Ever since my parents moved back to England before the handover, I was itching to get back here.  My craving was partitally satisfied during my menswear stint as I was back and forth several times a year, but I always knew I would return permanently.  Thankfully, I married a wonderful man who was completely up for the idea of living overseas.  I asked him to line up some interviews and to fly to Hong Kong to find a job!  As luck would have it, he was offered several!  I sold my menswear business and we moved in a matter of weeks.  There are so many reasons why we have stayed, not least because my maternal grandparents live close by us and we are blessed that they are a huge part of my children’s lives.  My grandmother folds virtually every one of the cards and tags that we sell at Lion Rock — at 88 years she’s still a force to be reckoned with.  A true Hong Kong Mom if ever I knew one! 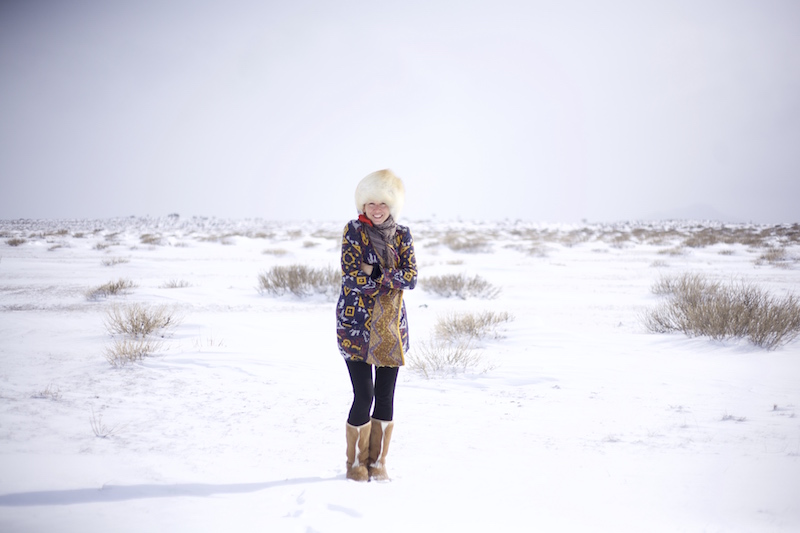 What time of day do you check Hong Kong Moms?  I check throughout the day because a lot of my business is still done through the Facebook platform.  For the first three years of the business I didn’t have a website, so virtually every transaction was through Facebook.  If I’ve ever have a spare moment on my computer, I love to check out what’s going on in the group — Hong Kong Moms is an institution!

What posts do you comment on and why?  I don’t think anyone can overstate what an important resource this group is.  Almost all the members have been new in Hong Kong at some point, and I feel a responsibility to comment on any post I think I can help with.  I have a folder on my desktop called “Little Black Book” and it is full of thousands of screengrabs from Hong Kong Moms which I (tragically) categorize so I can revisit them when I need them.  I’ve never posted a question which hasn’t had at least one extremely useful answer.  It leaves Google in the shade!

What is the best thing you have learned from Hong Kong Moms?  Oh, where to possibly start?  I learn something new from the group every single day.  I guess the one thing that stands out is learning about fellow moms’ businesses.  If I can, I will always choose to support them.  It has been amazing discovering and sharing all these amazing women’s endeavors.

What is your favorite Hong Kong Moms post?  I have three — and they’re all mine!  Is that allowed?!  The first was when I was embarking on a winter horseriding adventure in Mongolia and I needed to borrow kit for freezing conditions (in the spirit of reusing rather than buying new).  I asked the group if anyone would mind loaning me what I needed.  I didn’t really expect a major response.  Within an hour I had enough cold weather kit for me and my friend to brave the harshest conditions we’d ever experienced.  Complete strangers were entrusting me with really expensive items — polar sleeping bags, brand new thermals, ski gloves and goggles, walking boots, down jackets — it was completely overwhelming.  I was incredibly touched.

The second was the post that launched my business to the next level.  Last October I posted about my Hong Kong Transport Christmas decorations on the group to see what the feedback might be.  I had 444 comments on the post, over 300 private messages, 200 personal Facebook messages and 100 emails!  I was totally gobsmacked.  I had only ordered 750 decorations, and ended up selling 10,000.  Hong Kong Moms was almost completely responsible for that.   I will never get over that response!

The final one was earlier this year when my son and baby contracted salmonella and my son, in particular, was really badly affected.  I reached out to the group because I wasn’t confident in the doctor’s opinion and received amazing advice.  I took him straight to the Sanitorium where he stayed for a week.  People whom I had never met drove toys, books and games to the hospital to keep him happy as he recovered slowly.  Not only that, people sent messages every day asking how he was and offering to visit to relieve the monotony!  One lady drove all the way from Tai Tam!  On leaving the hospital, I commented on my post that he was finally getting out and I felt like all these women were celebrating the milestone with me, sending messages of good will.  Everytime I think of how grateful I was for that support it brings me to tears. 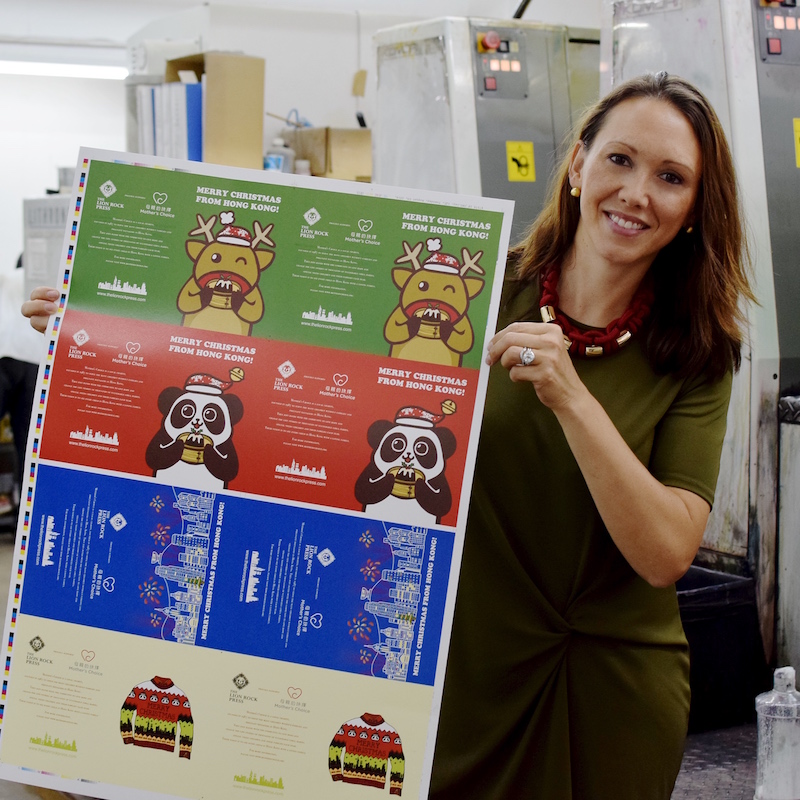 What do you ask Hong Kong Moms?  Oh gosh, what don’t I ask?!  Even the most obscure questions get answered.  Recently I asked if anyone could make a custom “ugly” Christmas jumper to complement my charity Christmas card range — I never knew there were so many talented knitters here!

What is your biggest Hong Kong fave?  Too many to mention!  Despite living here most of my life, I never tire of this city which is endlessly evolving.  Just yesterday, I was busy snapping photos like a complete tourist — Hong Kong inspires me every single day and I feel completely connected to my roots here.  It is safe (the most important thing for my family) and easy to get around.  With city, countryside, jungle, sea and mountains, there’s something for everyone — and all within a short journey.  I feel enormously priviledged to have a fantastic helper who, as much as is possible, allows me to “have it all” as a mother.  There’s nowhere else I’d rather live — it’s paradise, as far as I’m concerned.

And frustration?  This is going to sound really lame, but I don’t really have any complaints!  Lots of the things that are occasionally irritating are the same as any big city I’ve lived in.  I’m super grateful to live here and I don’t spend any time thinking about the negatives.

What is your craziest Hong Kong experience?  I met my best friend at the St John’s Cathedral playgroup.  The moment I set eyes on her I was completely drawn to her.  It was honestly like love at first sight!  I told her once that the first few weeks of knowing her was like falling in love.  Now we live close by, our husbands are best friends, our first born are best friends, we had our daughters together (I’m her daughter’s Godmother, and she’s mine) and they are inseparable.  Even our helpers are best friends.  It is a once-in-a-lifetime friendship and I have Hong Kong to thank for it.  The stars were in perfect alignment.  We see each other every day and we’ve never had a cross word.  As expats, our friends become our family, and I marvel at my good fortune to have met her all the time.

Does anyone ever recognize you or your name from Hong Kong Moms?  All the time!  And, as long as the kids are behaving and I have my make-up on, I love it!

What kind of friendships have you made through Hong Kong Moms?  I have made great friendships, but I have made absolutely vital business contacts too.  It is an unbelievable platform for all manner of connections.  Through this group I “met” mothers in Hong Kong who had suffered, or were suffering, with varying degrees of postnatal depression and had formed a Facebook group to support each other.  I found great comfort in that group of women and I wouldn’t have discovered them without Hong Kong Moms.

Which Hong Kong Mom would you like you to see featured next?  I’d be thrilled to hear from Nicola Burke, who writes the Jetlag & Mayhem blog.  Siobhan Barnes, who owns the Neon Life Society, really helped me when I was struggling with my work/life balance and gave advice that will stay with me all my life.  Marion Udall knows Hong Kong inside out and is always super helpful to newbies.  And Nicole Woolhouse, who started the charity Box of Hope, is someone many of us admire.